“I feel like Beyonce when I touch the stage. But in real life, I’m more like the rest of Destiny's Children,” event organizer and producer Will Cary explains. “The art of making others laugh is a gift and blessing that means a lot to me. I'm all about making an impact on people’s lives through comedy. I really strive to get people thinking and to give our guests a night out they deserve.”

Come out and support these up-and-coming comedians while enjoying a night of laughter at Scranton’s new upscale Speakeasy, Madame Jenny’s!

Deidre Mollura is an Ithaca-based stand-up comedian performing regularly across New York State, including the Finger Lakes Comedy Festival. With a point of view both dark and silly, Deidre shares her love of the weird things in life and makes having fun a priority.

Holly Griffin is an amateur comedian from the Binghamton area who started following her stand-up dreams just shy of a year ago. Laugh with her as she tells stories of uncomfortable social situations, Tinder adventures, and trouble with the law. Get ready for blunt honesty and the very weird debacles she gets herself into.

Angelia Petrillo is a Scranton-based Comedian who's performed throughout Pennsylvania and New York, usually for more than five people. First making an impression with her 2016 Scranton Fringe Festival show, "One Foot in a Pothole," she has continued to "serve up heavy doses of self-loathing" steadily throughout New York and Pennsylvania. Angelia is a frequent guest for Scranton Storyslam and has performed at the Broadway Comedy Club, Eastville Comedy Club, Dangerfield's, the Fingerlakes Comedy Festival. She won Matty B's Roast Battle 2 and opened up for Gilbert Gottfried. She is a Second City alum and co-founder of Streetkar Comedy, producing monthly Live Comedy Shows featuring both professional and up-and-coming comedians from the TriState area.

Taury Seward won the Who's Got Next? Rochester, N.Y., tournament and works steadily around New York and Pennsylvania. He enjoys Bob Dylan, spam and amusement parks. He's a crowd favorite and always helpful at the grocery store. Seward runs the successful “Laughs with Friends” and “Black on Black” comedy series and lives in constant fear of his grandfather.

Born in Kentucky and raised in Philadelphia , John Walton has entertained fans of all kinds with his endless wit and observational storytelling for nearly 20 years. He’s a five-time NEPA talent contest winner and in 2017 was a finalist in the World Series of Comedy in Las Vegas, competing against over 100 comedians from across the country. He just recently completed a 50 show tour, performing at over 20 state prisons.

Thomas Durdan is a product of Scranton. A 2004 graduate of  West Scranton High School, his passion for comedy started as far back as grade school. If you’ve seen him before, you know you’re in for a great time. His energy and passion can be felt every time he picks up a mic. In addition to comedy and podcasts, he’s devoted to helping his community however he can. He and his wife, Christie, have a bouncing baby boy. 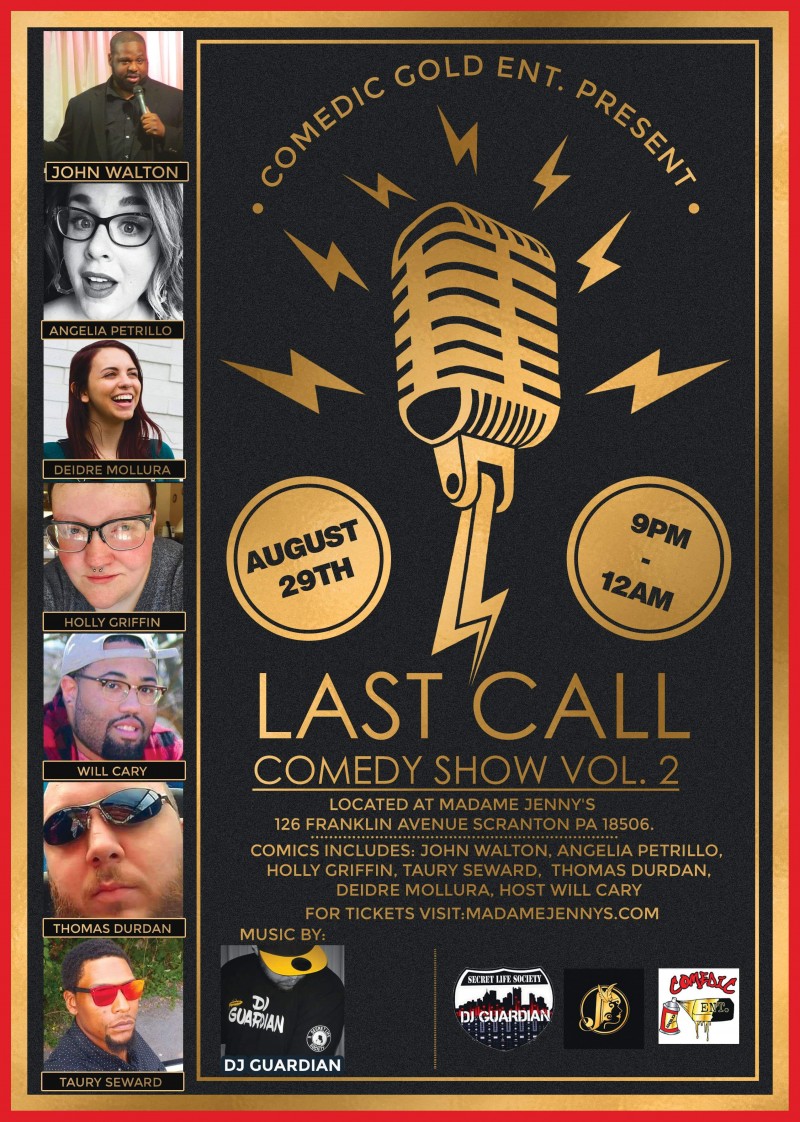